The original text was published on LesFurets Engineering Blog and I talked about it in multiple conferences and you can check the project page.

The dOOv library (Domain Object Oriented Validation) takes a different approach to domain model validation than popular validation libraries. It doesn’t implement the Bean Validation specification, but we thought it would be interesting to compare the performance of the different paradigms.

We decided to benchmark 3 implementations:

We used a subset of the JMH benchmarks from Hibernate Validator. Since dOOv doesn’t implement Bean Validation, we rewrote the benchmark as close as possible to the original benchmark (and noted when it differs).

For this benchmark series, we will run two different benchmarks:

The original article referenced a set of automated Bean Validation benchmark, but we won’t use that since it is too hard to port to dOOv.

Out of the box dOOv, is 1.6 times faster than the latest Hibernate Validation (with 3291 ops/ms). That’s because by default, validation evaluation short circuit on first failure.

By deactivating short circuit to follow the Bean Validation standard, dOOv is still 1.3 times faster, as shown in the following table and graph.

Numbers are in ops/ms, the higher the better. 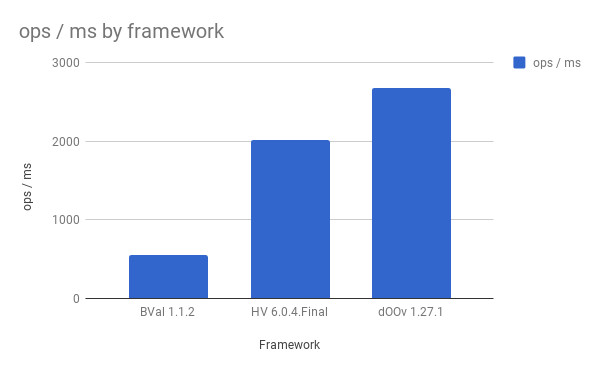 This benchmark is skewed in favor of dOOv, because cascading doesn’t really exists in dOOv. The benchmark was written so that the number of validated instances are the same, and the number of constraints are also the same, so it basically fulfill the same goal.

In dOOv, you explicitly need to list all fields that needs validation. This is a side effect of « flattening » your model, where cycles in the object graph cannot exist. As shown in the following table and graph, dOOv is an order of magnitude faster than the latest Hibernate Validation, around 16 times faster.

Numbers are in ops/ms, the higher the better. 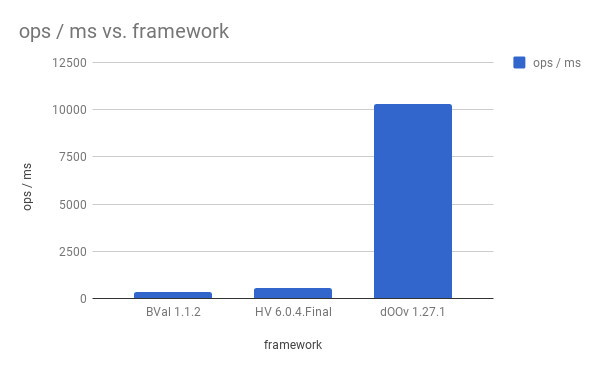 By choosing a different approach to Bean Validation, dOOv performance is faster that other rule engines. This project is still in it’s infancy, so we didn’t do a lot of performance optimizations, but the results are promising.

While designing dOOv, we learned a couple of lessons:

These benchmarks were run on a typical engineer laptop (Core i7 with 16 GB of memory). As always, this a micro benchmark, result may differ but you should see the same trends on any computer.

Here is the link to the benchmark code.